Lemon Lush Dessert is a perfectly light and refreshingly easy summer recipe! A crust layer of crushed Lemon Oreos AND pecans is topped with a cream cheese layer, a lemon pudding layer, and then freshly whipped cream. It’s smooth, tart, and luxurious tasting! Feeds a crowd, too.

We had a bit of a hair clipping fiasco at our house last week. The annoying thing about kid’s hair is that it never stops growing, so you always have to do something about it. Come on, didn’t I just cut your hair last month? And now I have to do it again?? (Kind of like how dinner never lets up. No matter what you do, somebody still wants dinner 24 hours after you made the last one. What gives, universe?)

Eric graciously said he would take care of our boy’s haircuts, and I graciously sent him a YouTube tutorial so that he didn’t screw it up. (Aren’t you bummed you’re not married to me? Eric is a saint.)

We started with the 2-year-old first, which in hindsight, was a mistake. You would not believe the level of crying, screaming, scissors-flying, ears-bleeding, hair everywhere, and general angst and chaos created from such a tiny human.

Then, after that episode, Eric had to clip the other, more placable son. 9-year-olds can totally sit still, so this should be easy peasy, right? Wrong. We paused that YouTube video so many times, and Truman still ended up looking like he got lawn-mow’d. At some point we just had to stop, because when things are going downhill and every move seems to make it worse, you just eventually call it quits, and accept that your kid looks like a hyena.

Oh well, I thought. The difference between a bad haircut and a good haircut is about 2 weeks, right?

I woke up the next morning and sent the kids off to school. And then I found out it was PICTURE DAY.

Noooo!!! The photographer probably took one look at Truman and thought, “are the scissors broken in your house, son?” (Where are my Parks and Rec fans at? 😉)

Well, now that I have solidified my son’s position as the un-coolest-of-kids on the playground, we can move on.

Let’s get back in the kitchen, guys. It’s seriously the only part of my life that I have not screwed up yet. (Okay wait, that’s not even true, I screw up recipes all the time. Dangit!!)

Well I didn’t screw this one up. I’ve got something amazing for you today. Have you heard of Lemon Lush?

What is Lemon Lush Dessert?

If you have not tried this stuff, sit down, shut up, and listen ;)

Lush desserts are cool and creamy, and live up to their name: they are LUSH. (“very rich and providing great sensory pleasure.” Yes puh-lease!) They’re usually made of several layers. A buttery crust, a lemony cheesecake layer, a lemon pudding layer, then topped with whipped cream.

People who try Lemon Lush for the first time are usually dubious, you can see it on their face. They take a tentative bite, widen their eyes in surprise, and say something like, “What did you call this again? What is it?” In other words, give me more information about this glorious thing that just happened in my mouth.

Most people, at least where I’m from in California, haven’t tried Lemon Lush. I feel like it’s a Utah/MidWestern thing? Or what region is “old church cookbook” found in? Bet you 10 bucks your grandma made something like this. Of course you can change up the flavors to whatever you want: I’ve seen chocolate versions, turtle, Pistachio, etc. More details on variation ideas below!

Let’s break this down. It may look like a lot, but I promise it’s so easy. This is an overview, the full recipe is below!

How to make Lemon Lush Dessert

First things first, we need to make the pudding so it has time to cool. I used Cook and Serve pudding, instead of instant pudding, because it is richer (hello egg yolks) and also there is more pudding per box, so you get a thicker layer of bright yellow pudding in your Lush. See recipe notes for using instant pudding.

DON’T use the ingredients called for on the box. Instead we are using 2 (4.3) boxes of cook n’ serve pudding, egg yolks, sugar, and milk. (The box calls for water. WHAT, NO. Whole milk, or this ain’t puddin’. Bust out the half and half if you’re feeling frisky.)

Mix it all together. Don’t do a wimpy job on this. If you have lumps in your mixture, there will be lumps in your pudding, and nobody wants lumpy pudding. Whisk it before you even turn the stove on.

Set it over medium heat and continue whisking, whisking, whisking. Don’t walk away or again, you will get lumpy pudding. Keep whisking just until it starts to boil and bubbles are coming up from the center of the pot. It should look like the photo above.

Set this aside in the fridge to cool while you make your crust.

Add some lemon Oreos and pecans to a food processor and pulse away.

Add in some salt and butter, then press into a pan.

Bake it for 20-25 minutes until the top is a nice golden brown. We want those pecans nice and toasty, so don’t under bake.

Whip up your cream cheese layer. Beat butter and cream cheese together with some powdered sugar, lemon zest and juice. Use lots of lemon zest!! Or don’t, if a supremely smooth texture is more important to you. (I’ll take the flavor any day).

Spread the cream cheese layer onto the crust once it’s cool. Spread it all the way to the edges.

Add the not-hot pudding on top of the cream cheese mixture and spread to the edges.

Press plastic wrap directly on the pudding so it doesn’t make that gross film on top. Why are you so strange, pudding? Chill for several hours. Nobody wants room temperature Lush. It wouldn’t be LUSH, ya’ll.

When you are ready to serve, whip up some cream and spread it over the top. Serve right away, sprinkle with lemon zest, more lemon Oreos, or crushed pecans! Make sure you steal a bite every time you pass by your fridge, like the heathen that you are.

Can you make it ahead of time?

Yes! Everything but the whipped cream topping. Because the crust is baked, the layers hold up very well. You can make this lush at least one or two days in advance before the crust starts to get soggy. Perfect for big holiday meals like Thanksgiving or Easter!

The whipped cream should be added just before serving. If you don’t have time to beat cold cream and add it right before serving, you can whip it a couple hours in advance, saving it in the fridge in a separate container.

How long does Lemon Lush last?

Lemon Lush will be good for around 3 to 5 days, although we usually finish ours well before then! Definitely don’t leave it out for more than an hour or two before putting it back in the refrigerator. It will keep longer that way, plus who wants to eat warmish pudding? Have some self respect.

Can you freeze it?

Yes, Lemon Lush is the perfect frozen dessert! Cover pan well with plastic wrap, then cover in foil. It will keep for 2 to 4 months. To thaw, simply place in the pan in the fridge overnight and let thaw slowly. If you serve it while it’s still a little frozen, I can’t see why this would be a problem!

If you are saving leftovers, just freeze it and hope for the best, presentation-wise. If you are making the recipe ahead of time and want to freeze the pan whole before eating any, I would leave off the whipped cream. Add the lemon pudding layer, seal well, and freeze. When ready to serve, thaw and then add fresh whipped cream on top. It will present much better that way!

Try making this recipe with any flavor profile you can think of:

Seriously folks, tell me what other flavors you try. I want to make every variation of this dessert ever! Though I do think this lemon one might always be my favorite. Enjoy!

Desserts don’t always have to be rich and heavy, sometimes cool and fresh is the order of the day. Here are some lighter-feeling treats to satisfy your sweet tooth! 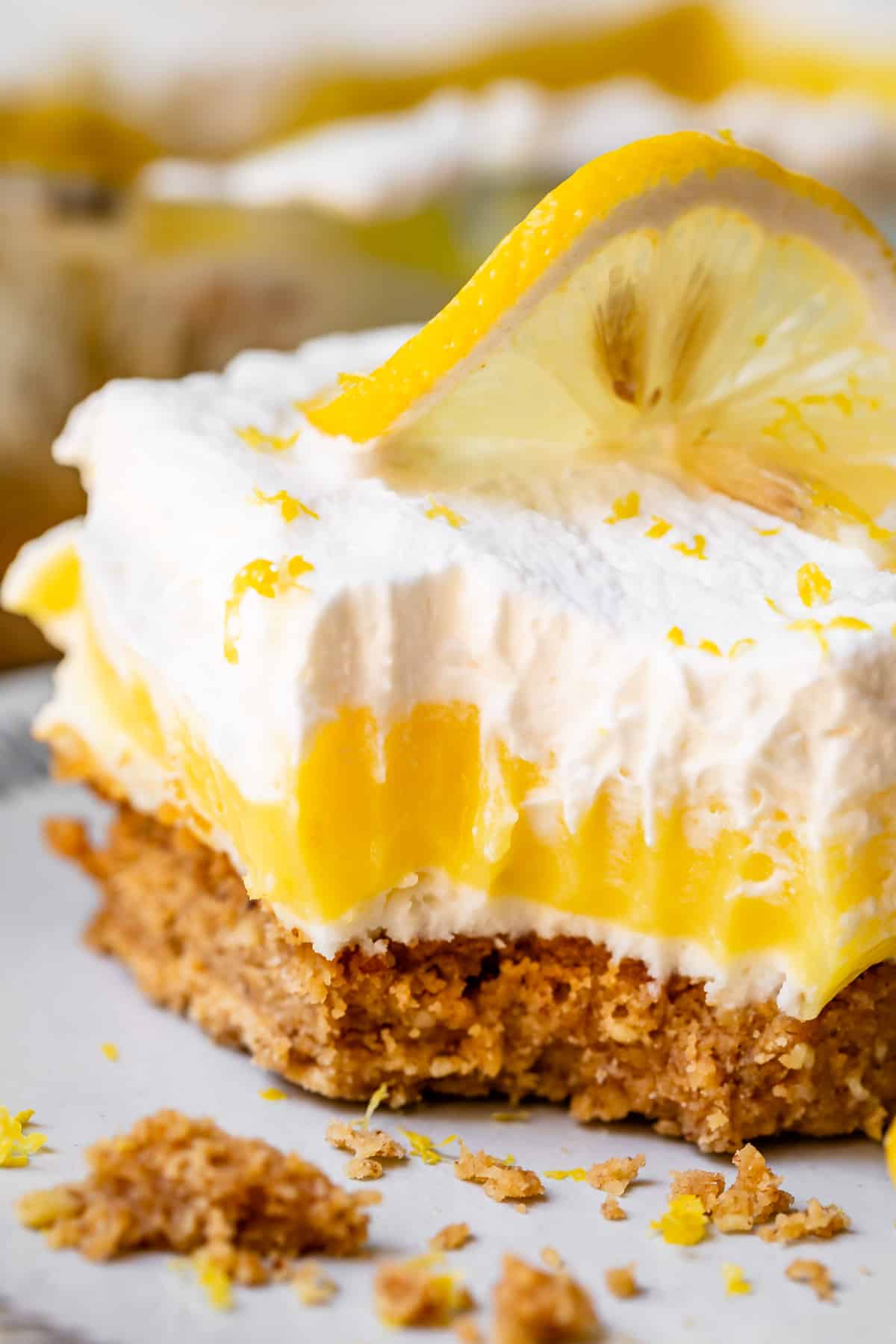 Lemon Lush Dessert is a perfectly light and refreshingly easy summer recipe! A base crust layer of crushed Lemon Oreos AND pecans is topped with a cream cheese layer, a lemon pudding layer, and then freshly whipped cream. It's smooth, tart, and luxurious tasting! Feeds a crowd, too.

For the cream cheese layer

*You can use 2 (3.4 oz) boxes of Instant lemon pudding if you want! Skip all the other ingredients listed for the pudding, and just add the milk called for on the instant box (2 cups per box, so 4 cups total.) No eggs or sugar needed. You lemon pudding layer will be slightly thinner than if you had used Cook and Serve. Once your instant pudding has set up for about 5 minutes, you can pour it on top of the cream cheese mixture and chill as usual.   **Heavy whipping cream, whipping cream, ultra heavy cream, or just “cream” are all the same thing: the cream that rises to the top of milk when you milk a cow. (No, I’m not talking about coffee creamer, yes, people ask me this every time 😂) The difference in the names is a reference to the fat content level of the cream. Any kind will work for this recipe. The higher the fat content (40% is ideal), the sturdier and tastier your whipped cream will be.  Freezer instructions: Cover pan well with plastic wrap, then cover in foil. It will keep for 2 to 4 months. To thaw, simply place in the pan in the fridge overnight and let thaw slowly. If you serve it while it’s still a little frozen, I can’t see why this would be a problem! 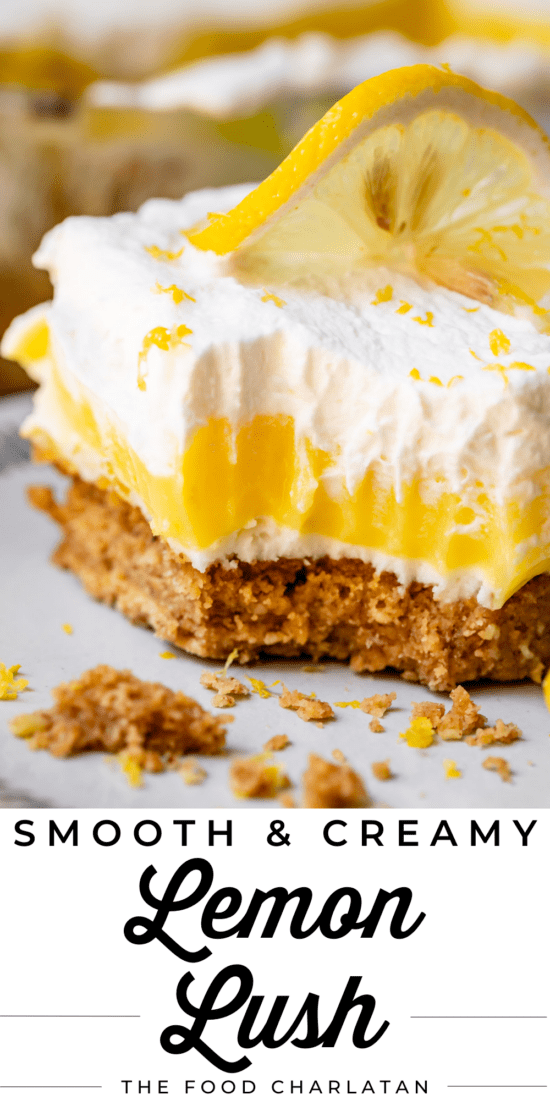 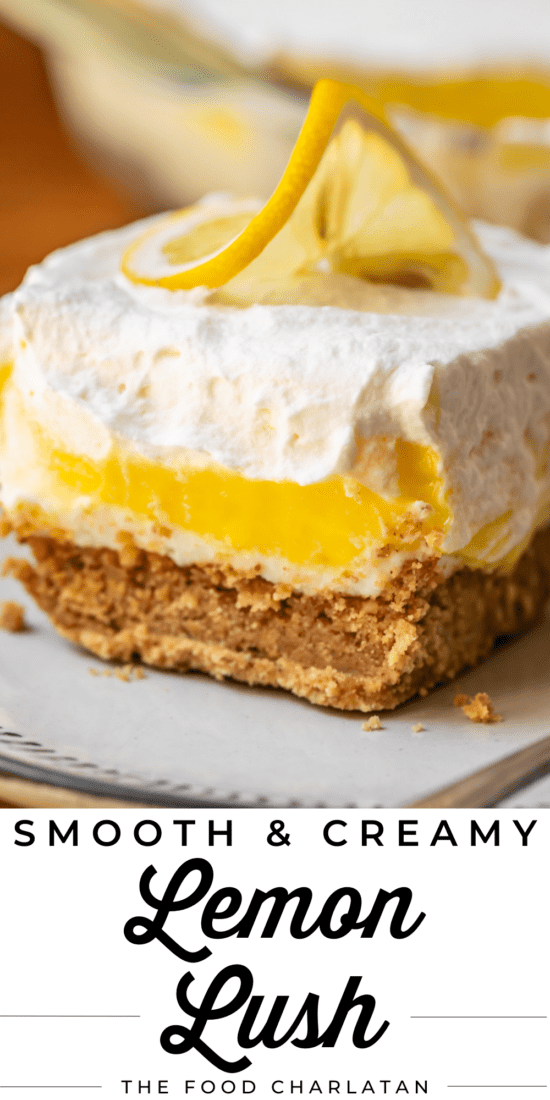