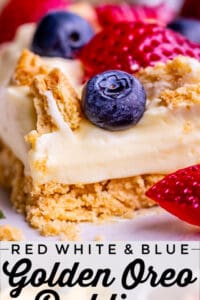 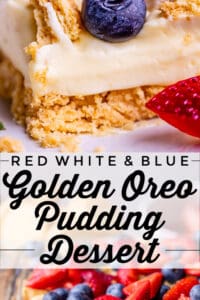 You have probably had a version of this Layered Pudding Dessert before! It is a popular dessert for good reasons: it’s super easy, it feeds a crowd, it’s no bake, and it’s so freakin good! I made it with Golden Oreos layered with vanilla pudding, topped with strawberries and blueberries. Such an easy and festive dessert for 4th of July! 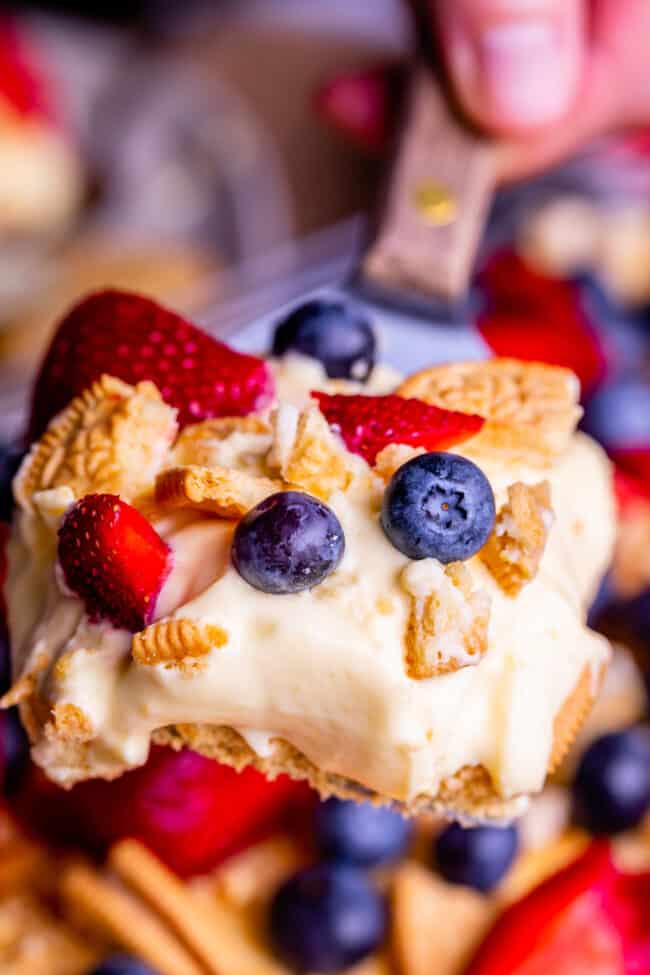 Valentine, who is 3, just raced into the kitchen from the backyard, grabbed a kleenex from the drawer, and ran back outside. We watched her through the window as she went to a certain spot and looked around frantically, searching for something. And then she saw it: a tiny spider, jumping and scrambling to get away as she tried to use the kleenex to squish it. I think she probably looked a bit like Darla from Finding Nemo, with the crazy eyes. 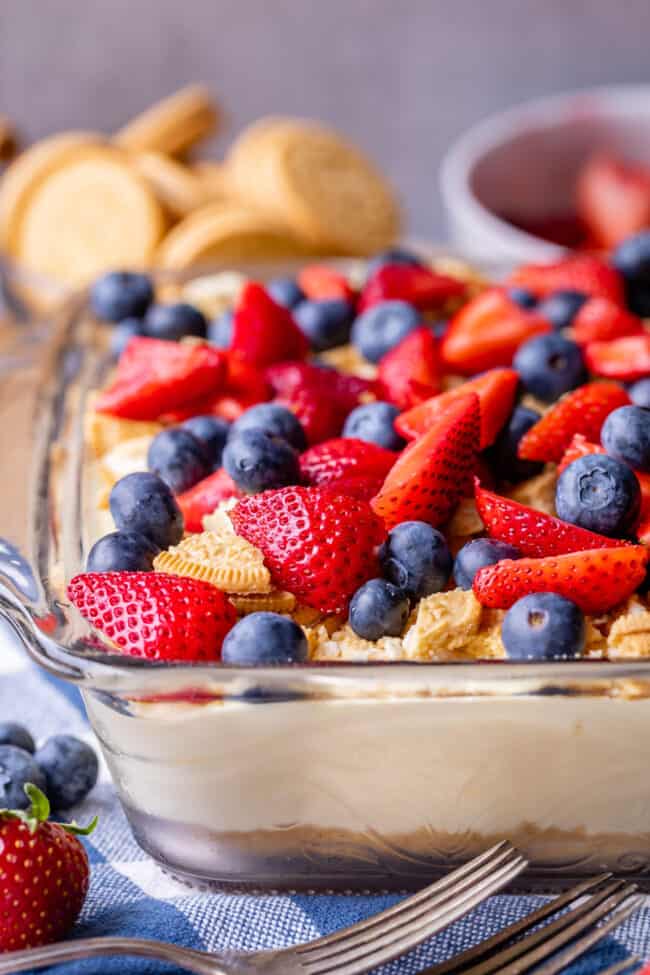 My kids are so used to me calling in Eric to slay my dragons (i.e., squish spiders) that I guess no one ever thought to tell her that we only get the ones that are INSIDE the house. I’m kind of impressed with her bravery though, I mean right?? Hopefully she will have a healthier relationship with inevitable household pests than I do. Because I’m definitely the annoying lady squealing on top of a chair. 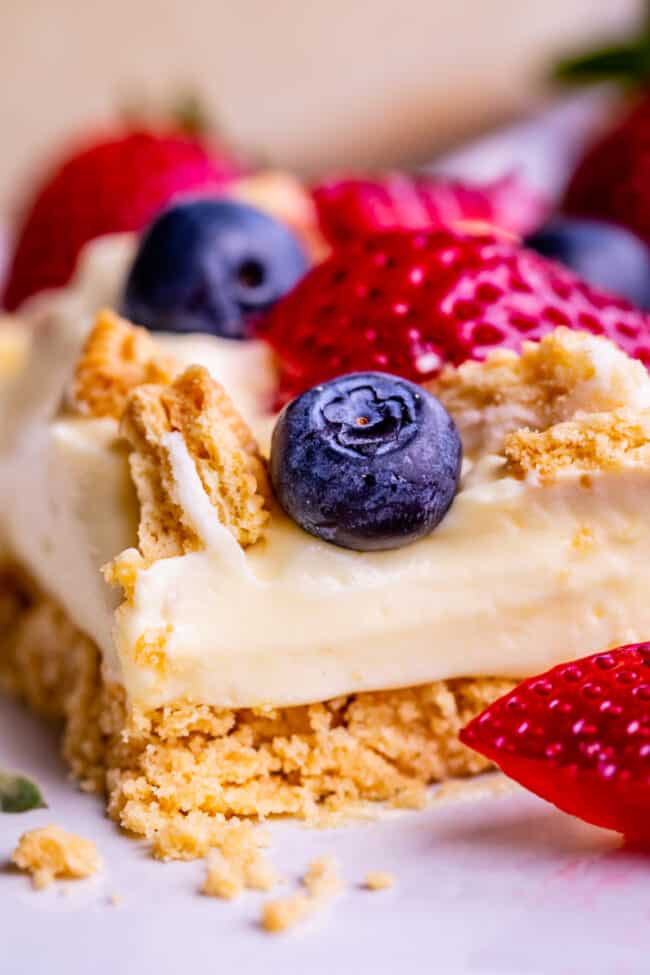 Who is ready for Father’s Day this weekend? When I was growing up, there were a couple easy gifts we could always get my dad: film for his camera (he always needed more), black socks (he always needed more), and batteries (who doesn’t need more?) Not exactly the most thoughtful of gifts, but Dads in general are tough to shop for, right? Especially when you’re a kid. 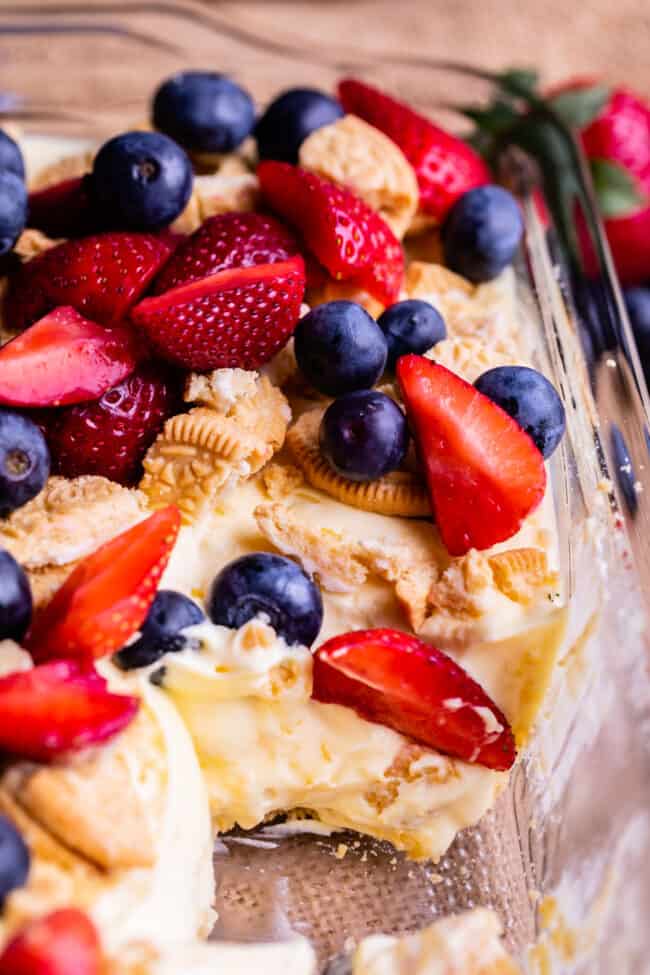 I still struggle to come up with unique gifts for Eric. I feel lucky that I have one consistent thing to fall back on: instead of black socks it’s vinyl records. The man is obsessed. The only problem with this is that there is NO way to disguise a record arriving in a mail. They all come in perfectly flat square packages. And now that he works from home for quarantine? Forget about it. He knows immediately. He will definitely read this post before Father’s Day and I’m not even pretending  that the flat square package he set next to my bed yesterday is not a new record for him. Sorry Eric. Come up with a less-odd-shaped thing to be into, okay? 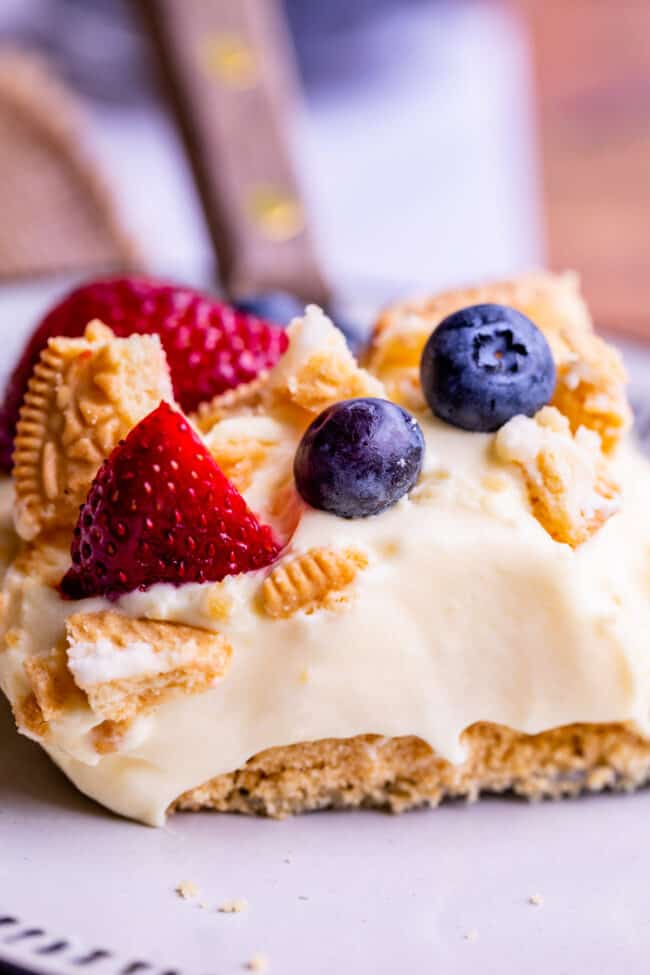 Have you guys ever had a layered pudding dessert before? It’s a classic that’s been around since instant pudding’s been around I think. It’s SO easy to make, feeds a crowd, and everyone LOVES it. Seriously. If you take it to a potluck you will have to be willing to pass out your recipe and be prepared for zero leftovers. 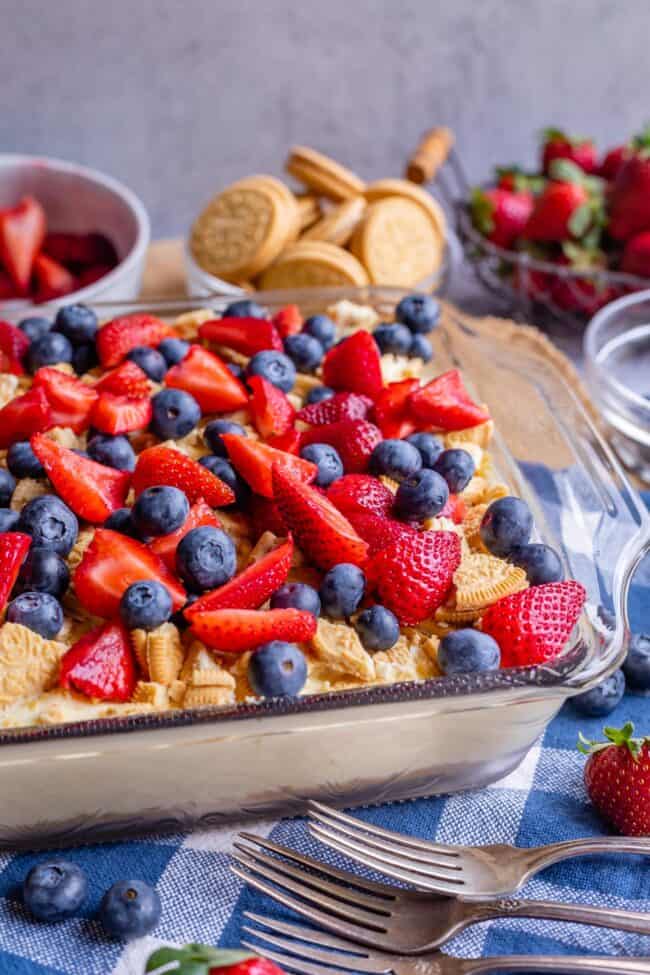 Don’t take my word for it. This recipe is as old as the hills for a good reason. I just found a version of it in a teacher recipe collection from my elementary school, circa 1992. They called it a “Chocolate Pudding Torte.” I’ve also seen it called Pudding Lush, Layered Yummy, Dream Cake, Chocolate Delight, Dirt Pudding, etc. They are all basically the same idea: mix up some instant pudding according to the instructions, then fold in some cream cheese and whipped cream. Layer as desired with a homemade crust, Oreos, etc. 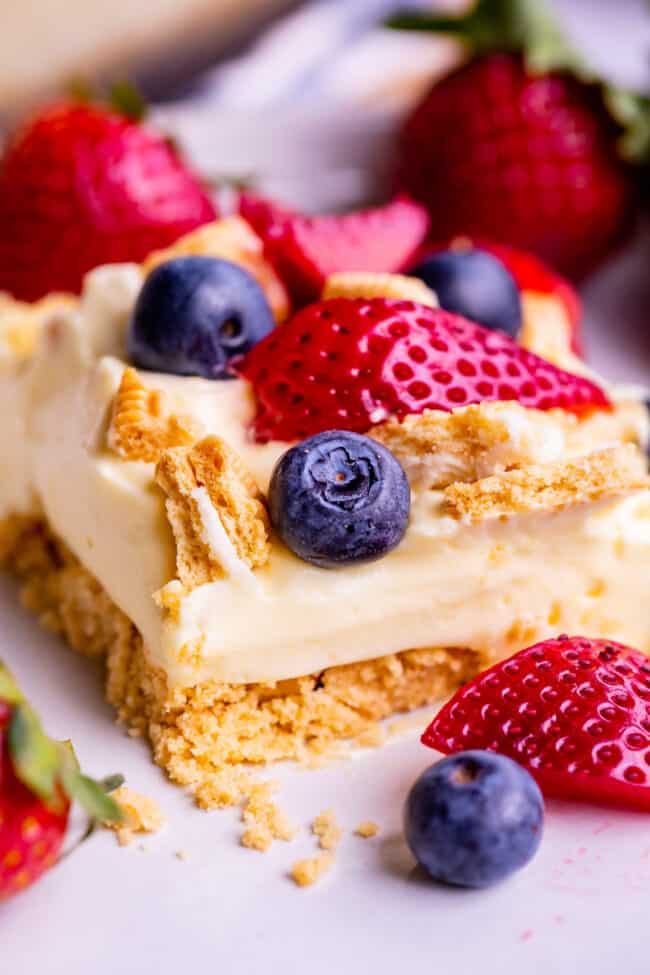 The flavor options are basically endless. You can use any kind of pudding and take it in whatever direction you want. Lemon, raspberry, strawberry, pumpkin, cherry, pistachio, etc. I can’t wait to share more versions of this with you! The next one I make will definitely be a chocolate version. Stay tuned :)

How to Make Layered Pudding Dessert

My sister Laura sent me this vanilla version of Layered Pudding Dessert that she made for Memorial Day. It has crumbled Golden Oreos, French vanilla (or cheesecake!) pudding, and is topped with a whole bunch of fresh blueberries and strawberries. It’s looks so festive and fun for the 4th of July, and it’s SO easy to put together! Bonus for the summer: you don’t even have to turn on the oven.

When Laura made this, she smashed a bunch of Golden Oreos in the bottom of her pan, and then added the pudding on top. I decided to make a crust out of the Golden Oreos. I crushed them completely in a food processor and added a bit of butter, pressed it in the pan and froze it for a few minutes to set up. 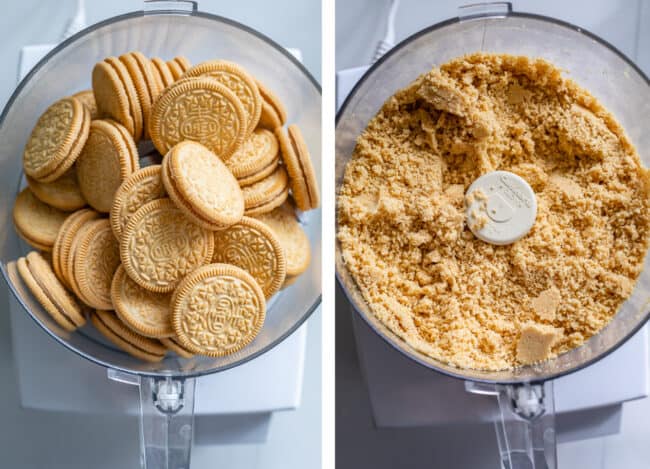 I tried it both ways and think both taste really great. I did the crust with butter so that I could get more of a “slice” look for my photos. But honestly, crumbling Oreos in the bottom of your pan is easier, faster, and when you serve this, it’s basically going to look the same. Pudding, even when mixed with cream cheese, is still too loose to stay upright on a plate very well! You definitely need a spoon for serving!

Next up, beat the cream cheese, whip the cream with a little powdered sugar and vanilla, make the pudding according to the package, and fold all that together to make the dreamiest substance you have ever dipped a finger into. 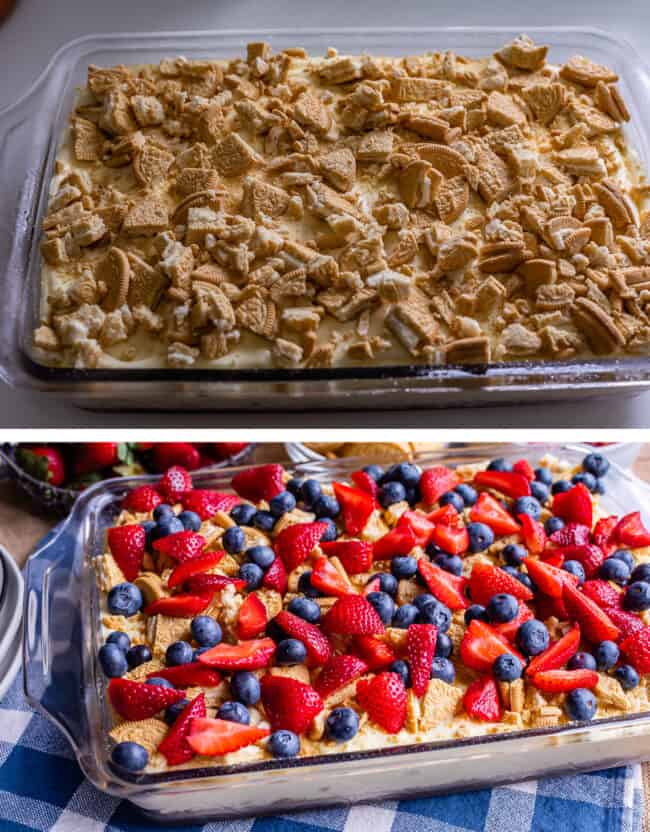 If you want another layer to make this go even further and serve more people, you could double the whipped cream, fold half into the pudding, then save the other half to spread on top of the pudding layer, then sprinkle with the remaining Oreos. Yum! 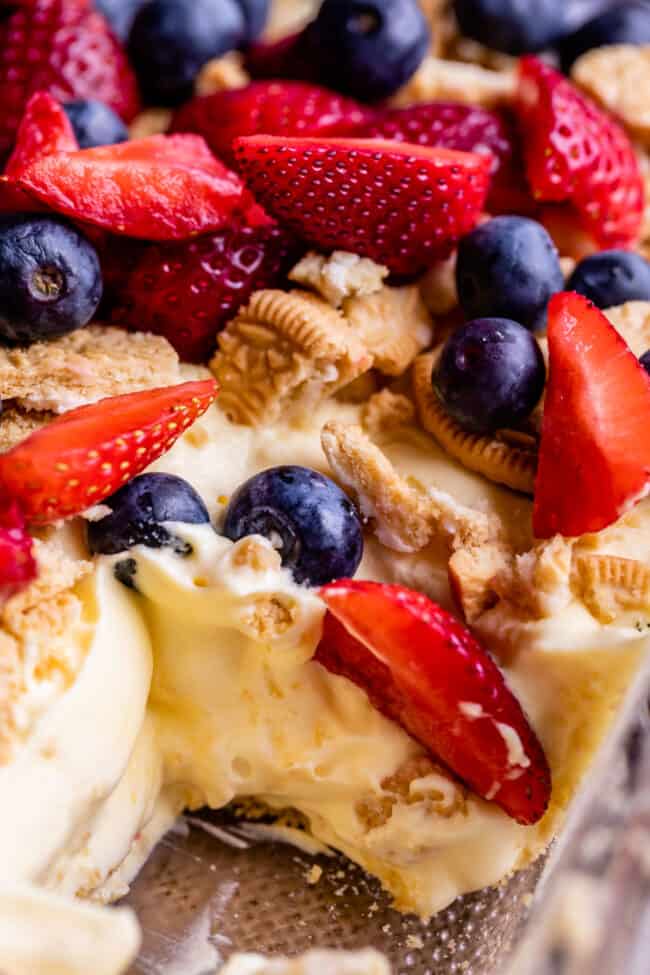 Another note that I’m a little embarrassed to admit: I had extra Golden Oreos on hand and decided to add even MORE than the recipe calls for to the top (just a few). Then a couple days later Eric and I were still sneaking bites from the fridge every day, and realized that the Oreos on top had become too soft. So we just added more, crumbling them over the top with our fingers, like little gluttons. It was worth it.

More summer desserts you will love! 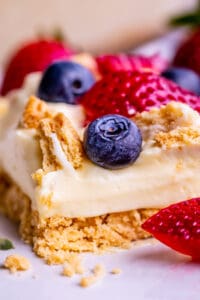 Servings: 12 Servings
Prep Time: 20 mins
Total Time: 20 mins
You have probably had a version of this Layered Pudding Dessert before! It is such a popular dessert for good reasons: it is super easy, it feeds a crowd, it's no bake, and it's so freakin good! I made it with Golden Oreos layered with vanilla pudding, topped with strawberries and blueberries. Such an easy and festive dessert for 4th of July!

*I haven't tried it yet but my sister Laura made this with lemon Oreos and said it was amazing. I'm trying it next time! **You can omit the butter and crumble the Oreos in the bottom of the pan instead. ***People ask me all the time what cream is, which I think it kind of hilarious (but I am the self-proclaimed Food Charlatan, so who am I to judge). Cream is sold near the milk usually in pint or quart cartons. It is not coffee creamer. It might be labeled "heavy cream" or "whipping cream." The differences in the names have to do with the fat content of the cream. Any level fat content will be fine for this recipe.  ****Laura said she likes to use cheesecake flavored pudding, but I couldn't find any. I'm sure it's so good! Can't wait to try!