This is literally the best pumpkin pie you will ever have! It’s a perfect pumpkin pie recipe to begin with, but then we go and blow torch it to get that crackly crème brulée topping. Guys. I thought I wasn’t a pumpkin pie lover, but I was WRONG!!

Welp, here we go again guys. Miss Congeniality 1 AND 2 are available on Netflix. There go all my brain cells again. Why can’t I stop myself? I have to say, I much prefer Michael Caine as Sandra Bullock’s feminine stylist to any other role he’s played. “Wear the crown, be the crown, you AH the crown!”

I walked into my friend’s house the other day and she had her Christmas tree up. YES! The rest of the world is finally coming to accept what I’ve know for weeks now: it’s time. Christmas decorations, baking, and Bing Crosby will put you in a good mood faster than anything else this time of year.

Now don’t get all mad at me about hurting Thanksgiving’s feelings. He will get through this, I promise. I saw a post recently from a friend of mine from overseas, who pointed out that in her country they don’t have Thanksgiving, so it’s totally natural to start easing in to Christmas in early November. See?? The Europeans know how to do all the important things right. Croissants, cheese, and Christmas. What else is there?

Do they eat pumpkin pie in Europe? Is this just an American thing? I have no idea, all I know is that I’ve always kind of hated pumpkin pie. As a kid we had Pumpkin Pie, Lemon Meringue Pie, Blackberry Pie, and Mint Brownies for Thanksgiving dessert. How can pumpkin pie compete with chocolate?

My taste buds have grown up a bit since then, and now I think that pumpkin pie is okay. But I still felt like it needed a little something something to make it more interesting. And now I’ve found it: Crème Brulée topping!!

Have you made this Crème Brulée Cheesecake? Many, many people have made this recipe and said it’s the best cheesecake they’ve ever had. I’m convinced that a crackly torched topping is going to make ANY dessert 100 times better. Pumpkin pie is no exception. It’s SO GOOD.

This is a pretty classic pumpkin pie recipe, and you could make it without the crackly topping if you want to be boring. OR, you could spend 20 bucks on a kitchen torch and wow and amaze all your guests when they see your fire-wielding skillz. I thought about trying to make the pumpkin pie recipe a little more crème brulée-y, but then I realized that pumpkin pie is already a custard. I wouldn’t really want it to be any softer than it is.

On the left is the brulée that has softened and melted down the side of the pie. You have to eat it quick!

Hopefully you can tell from the photos that it’s definitely on the softer, creamier side of the Pumpkin Pie Spectrum of Softness. This is mostly because it is NOT over baked, so the pie has a chance to stay pretty soft. The result is a creamy and slightly soft pumpkin custard, that is not at ALL dry in any way. You know what I mean by dry, right? Maybe texture is a better word. Overcooked pumpkin pie just has a weird texture. No bueno.

One bowl for the filling. Pumpkin pie is pretty easy to make.

Use a crust shield so your pie crust doesn’t get over baked!

Have you scrolled down to the ingredient list yet? Did you see the black pepper? Are you freaking out on me? Don’t let this be a deal breaker guys. I PROMISE this pie doesn’t taste like pepper. In this recipe, the pepper serves as an enhancer, much like salt acts to bring out the flavor of other ingredients. In this pie, we’ve got ginger, cinnamon, nutmeg, cloves, and cardamom. It is a fantastic combo, and the black pepper just helps bring out the warmth of the other spices (It’s not going to burn your tongue or feel savory. Just perfectly spiced.) Guys, trust me, it’s so much better than pumpkin pie spice!

As I mentioned, pumpkin pie is a custard, and custard puffs as it cooks. When it cools, it shrinks and pulls to the edges, causing cracks in your pie. We want it to shrink slowly, so dramatic temperature changes are a big no no. Read the instructions carefully for tips on how to avoid cracks in your pie.

I really hope you get to try this pie out for Thanksgiving! It will be a showstopper, I promise! Let me see your creations, tag #TheFoodCharlatan on Instagram!

P.S. I can’t really recommend this because I’ve never had a store-bought pumpkin pie that I liked, but if you are on a real time crunch I suppose you could buy a pie, then sprinkle the top with granulated sugar and torch it. A pretty good hack to make a store bought dessert way better! But…if you have time. Make this pie. It’s amazing! 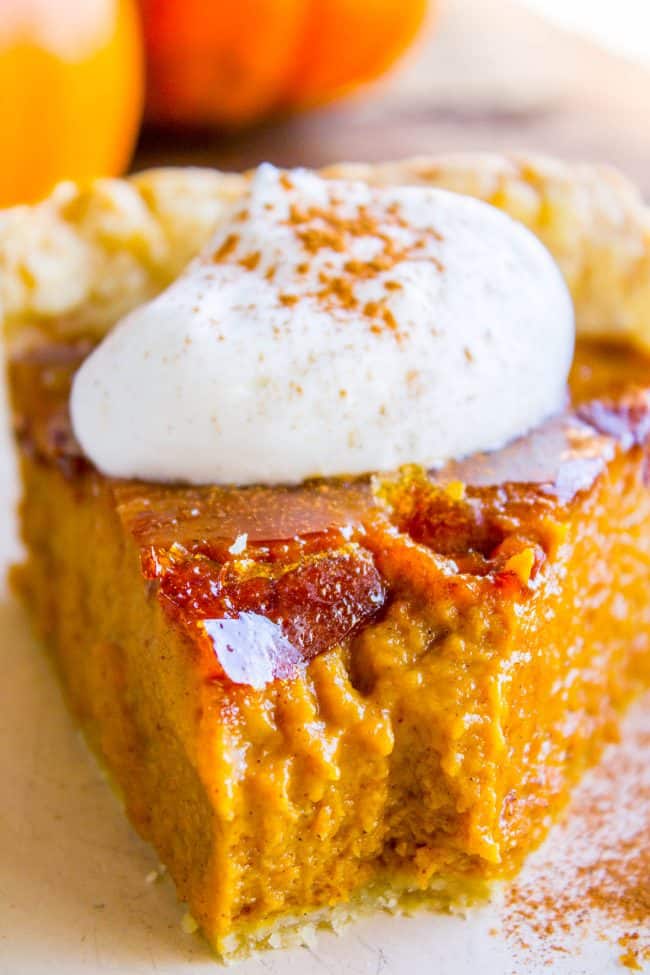 This is literally the best pumpkin pie you will ever have! It's a killer pumpkin pie recipe to begin with, but then we go and blow torch it to get that crackly crème brulée topping. GUYS! I thought I wasn't a pumpkin pie lover, but I've had a total change of heart.

*Of course you can totally use a store bought pie crust. I’m no judge. You will only need one sheet of pie crust. (Half a package) **If you don’t have any super fine sugar, you can make your own by blending up some regular granulated sugar. Blend it for just a few seconds otherwise it will turn into powdered sugar. I know you are all hoping to read in the notes that you can actually just broil the pie to get the crunchy topping, but I’m so sorry, you can’t! It will not be the same and all you will have is a burned crust. Trust me, a kitchen torch is totally worth the investment! One more note: this pie is perfect for making in advance. Make a day ahead of time, stick it in the fridge, then torch it last minute while all your friends ooh and aah :) If you would like to do 2 days ahead, I recommend beating an egg white and brushing the bottom of the pie crust with it before adding the pumpkin filling. This will help your bottom crust stay flaky and not go sad-soggy on you. Source: The recipe is mine, but I got this idea from my brother Eric, who made a version last year. He likes to take a few slices of ginger and mix it with the fine sugar that is going to be bruléed. Let it sit for several hours and allow the ginger to flavor the sugar. Then brulée as usual. It sounds amazing and I’m totally trying it next time!

More desserts that would be great for Thanksgiving!

Crème Brulée Cheesecake << this is one incredible dessert. You will not regret it!

Apple Custard Pie with Cinnamon Streusel << Everyone who makes this one loves it!