Rhubarb Shortbread Bars are a dream come true! A thick and buttery shortbread crust, topped with a layer of simple rhubarb filling, then sprinkled with even more glorious shortbread crumble. There is a secret ingredient in this recipe that makes these rhubarb bars bright ruby red, and it’s not food coloring. It works like a charm! Originally posted May 20, 2020.

Charlotte is sitting next to me at the table doing her math homework. She was in the middle of a larger problem, talking out loud to herself and said, “13 minus 8 is…” and before she figured it out I volunteered, “Five.” She was completely flabbergasted. “REALLY??”  Yes, really. Then I saw her discreetly count it out to make sure. “Huh. You’re right,” she said.

I don’t get no respect around here. Since we started this whole “distance learning” business, Charlotte has figured out that I am not the adult in the house to come to when there is a math problem to be solved. Now apparently she thinks I don’t even know how to subtract. I may not be a rocket scientist but SHEESH Charlotte!! Give your old mom a break!

In other news, it’s rhubarb season!!! If this is not triple-exclamation-point worthy info for you, then you are missing out. Eric’s parents are in town for a visit, and I just asked them if they have any old family jokes about rhubarb that I could talk about here on the blog. Kris, my mother-in-law said, “I don’t know Karen, rhubarb is a subject we don’t joke about in our family. We take rhubarb pretty seriously around here.”

Ha! We mean business when it comes to rhubarb. Before marrying into Eric’s family, I had never even heard of it, and now I’m duly obsessed just like everyone else. Eric’s dad just told me that when he was a kid he and his buddies would steal rhubarb stalks from the neighbor’s yard and eat them raw. No thank you! I like my rhubarb with sugar, in a pie preferably! Or these rhubarb shortbread bars!

Kris has been making her Grandmother Prudy’s Rhubarb Dream Bars for years and years, and I will get around to posting them someday (they are very similar to these Rhubarb Meringue Layers, just without the meringue), but with this crop of rhubarb I wanted to try out some simple shortbread bars. I’ve been obsessed with shortbread bars lately; see evidence in the Cherry version, apple version, cranberry version… there is just something amazing about fresh fruit and buttery sugary shortbread. It’s my favorite!

The reason I love shortbread bars so much is because they are not too sweet. Shortbread compliments the natural tartness of the rhubarb so well. Sure there is some sugar in there, but we are not topping our rhubarb bars with a crumble made primarily from sugar; instead it’s extra buttery crust going on top. Just like a pie!! I should have called these Rhubarb Pie Bars! Let’s dive in a bit on Shortbread. This stuff is gold:

Shortbread Pastry: everything you need to know!

Here are all the ingredients you’re going to need for this glorious crust:

Back to the basics, yo. This stuff is so simple and so good.

What is shortbread texture?

Shortbread has the word short in it because there’s no rise time and therefore no waiting. With less time (and more butter!) the long gluten proteins that hold bread together can’t form, making a delicious, crumbly texture.

What’s the difference between shortcrust pastry and pie crust?

Not much! It has the same ingredients, only when making shortbread you add much more sugar and you don’t roll it out. Instead we are pressing it into a pan to make perfectly square hand-held pie bars!

How to Make Shortbread Crust

It’s so easy! Be sure to check out the recipe below for more details and tips!

Now that we’ve got our crust all done, it’s time to make the filling. These rhubarb bars are suuuper easy to put together!

Start by chopping up your rhubarb. I like to slice the rhubarb lengthwise and then chop it.

And here’s where the magic happens.

Ta-da! Grenadine syrup! This is a super easy hack for getting your rhubarb to bake up bright red instead of that ugly green-brown color it can turn to in the oven. It makes it so pretty! We are soaking the rhubarb in grenadine for an hour or two, then draining.

If you don’t have grenadine or can’t find it (it was at my local store on the liquor aisle, next to the vodka) you can skip this step. Add a couple extra tablespoons of sugar to the rhubarb filling and you will be good to go.

Look at this bright red rhubarb! No strawberries necessary. I have nothing against strawberries, but I just love rhubarb all by itself and don’t want to have to depend on strawberries for consistent color. Why is rhubarb such a weird color?? It is like the only dessert fruit I can think of that bakes ugly. Grenadine and rhubarb for the win!

Now for some FAQ!

Why is my shortbread crust so hard?

Some bakers have commented that their shortbread crust ends up too hard. No thank you! Here are some tips.

How do I make my shortbread crust less crumbly?

A little crumble is what we’re going for, but if you need to take it down a notch, try adding a tablespoon less butter. And make sure you spoon and level your flour so you aren’t accidentally adding too much.

How to store and freeze rhubarb shortbread bars

I like to store Rhubarb bars on the counter, covered with a lid or plastic wrap. After 1-2 days, transfer it to the fridge, where it will last another 5-7 days. (how could it last so long?? I basically eat nothing else until these are gone 😂)

These bars freeze really well. Once cool, seal in an airtight container or in a ziplock and stick em in the freezer. They will last for 3-4 months. Let cool in the sealed container either in the fridge or on the counter.

More rhubarb recipes you are going to love!

More shortbread bar recipes you are going to die for!

I’m a little obsessed with shortbread bars you guys. They are just the best! I will make a version of shortbread bars with every single fruit in existence someday before I die. There, bucket list item, proclaimed!! 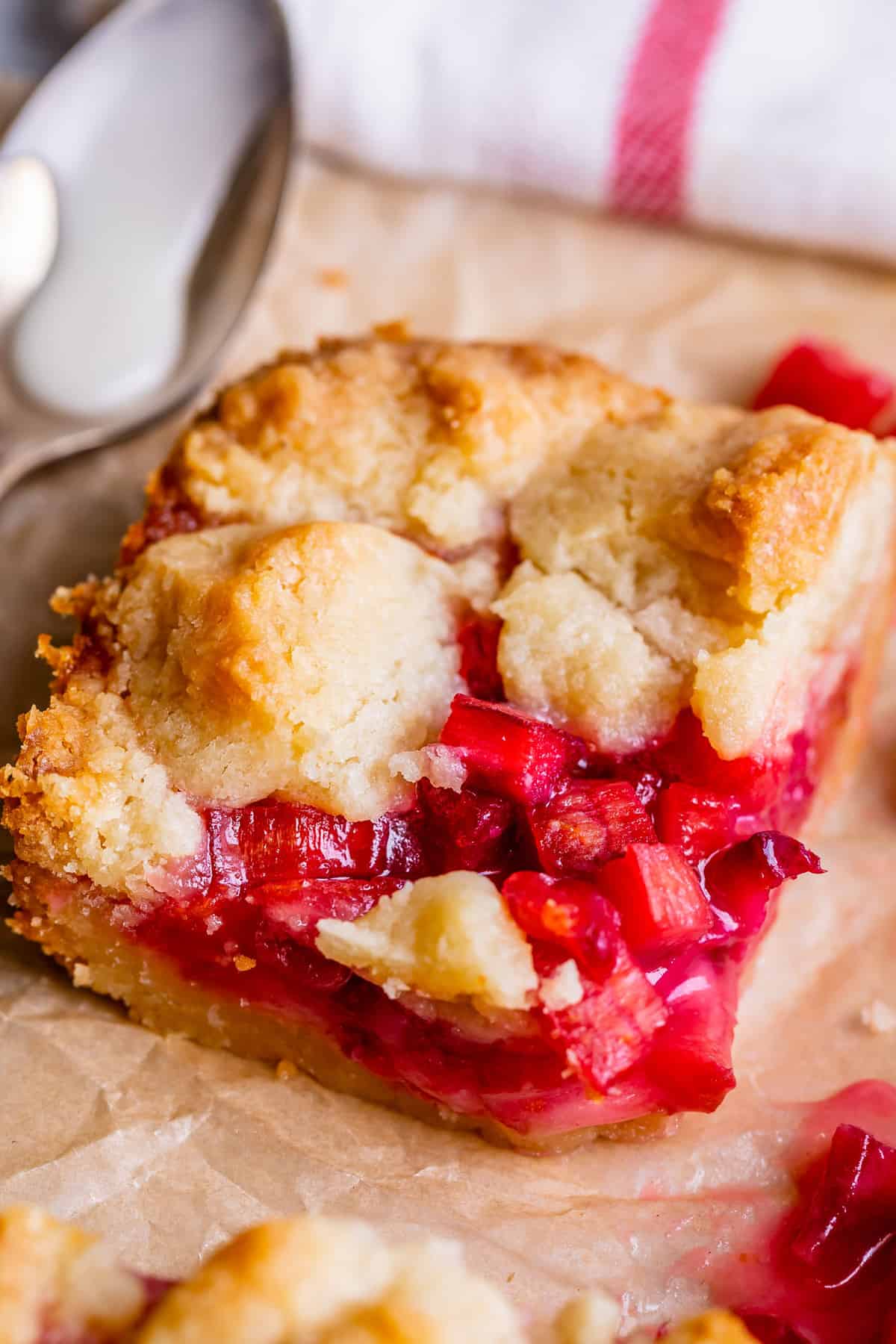 Rhubarb Shortbread Bars are a dream come true! A thick and buttery shortbread crust, topped with a layer of simple rhubarb filling, and topped with even more glorious shortbread. There is a secret ingredient in this recipe that makes these rhubarb bars bright ruby red, and it's not food coloring. It works like a charm!

For the rhubarb filling

*If you don’t soak the rhubarb in grenadine (the recipe will still work fine), add 2 extra tablespoons sugar to the rhubarb filling (3/4 cup plus 2 tablespoons.) 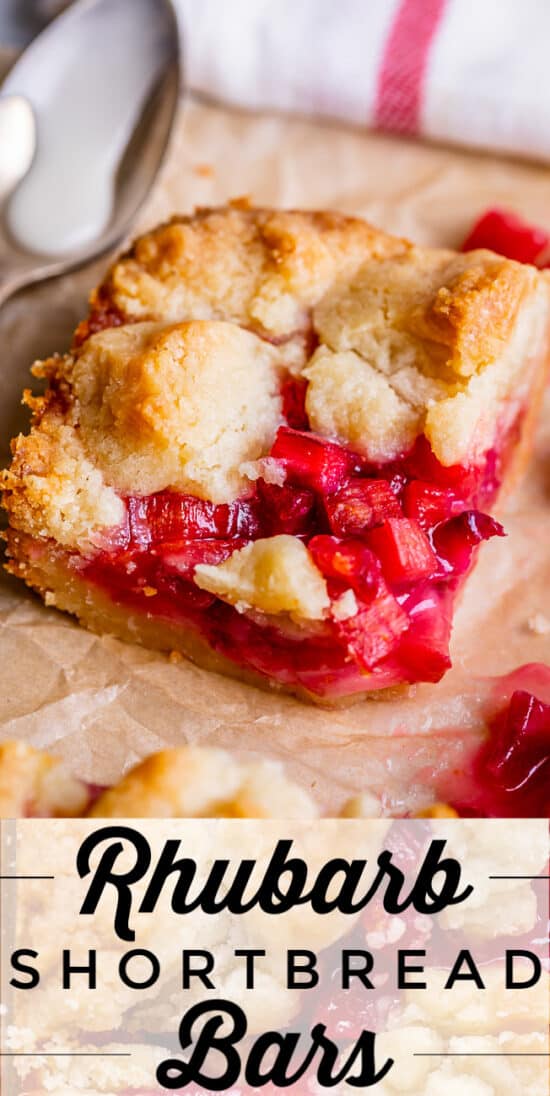