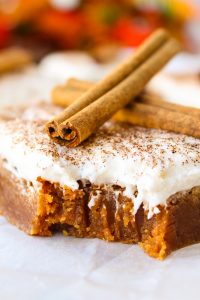 This pumpkin cake starts out with melted butterscotch chips and just gets better from there. It is moist and chewy and almost brownie-like, except for the copious amounts of creamy vanilla frosting on top. This is pumpkin dessert at its finest, my friends.

Did you guys know that on Talk Like a Pirate Day you can go to Krispy Kreme dressed up like a pirate and get a dozen donuts? A DOZEN!

My brother’s wife told him this in passing a few weeks ago, like a “wouldn’t that be fun” kind of comment. But Eric (my brother, not my husband) decided that this was happening, and proceeded to buy fake earrings, leather shirt straps, and fake parrots to legitimize their entire family’s pirate-ness. Don’t they look awesome? 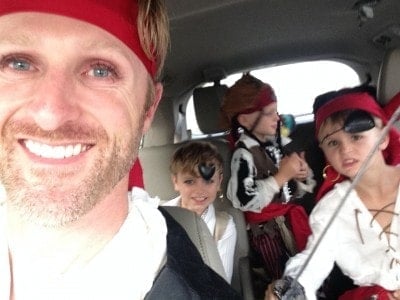 I wish I had been there when they tried to put makeup on the boys. “You can put the stuff on the hairs of my eyes, but not the smudgy stuff” (eyeliner). 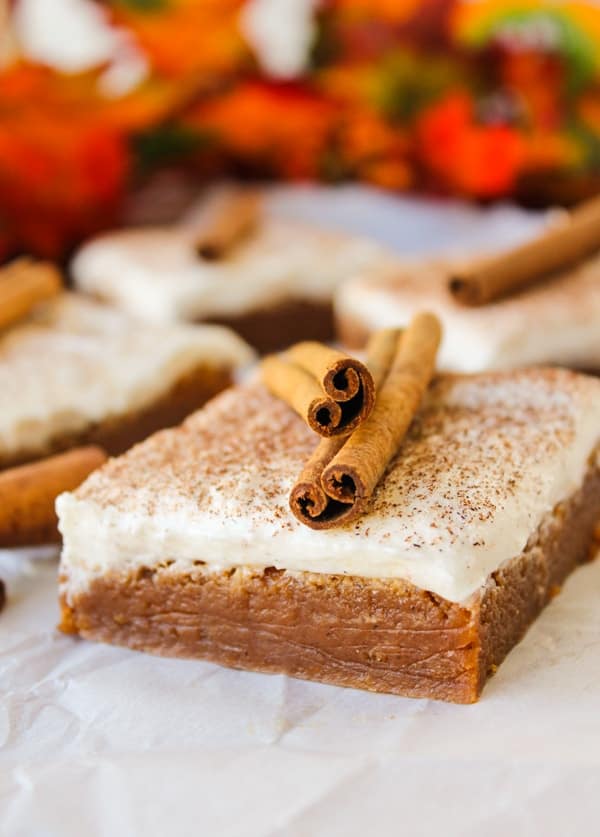 Right after Eric sent me this photo, he texted me about this cake.

“Have you posted your pumpkin square recipe yet? I was bragging about them to someone.”
“No, I will soon. I’m so sad that it looks just like every other pumpkin cake out there. No one will know.”
“Hahaha. You should use big red photoshop arrows to point out all its awesomeness.”
“Yes. HERE’S the frosting. HERE’S the cake. It’s so original it will blow your mind!!” 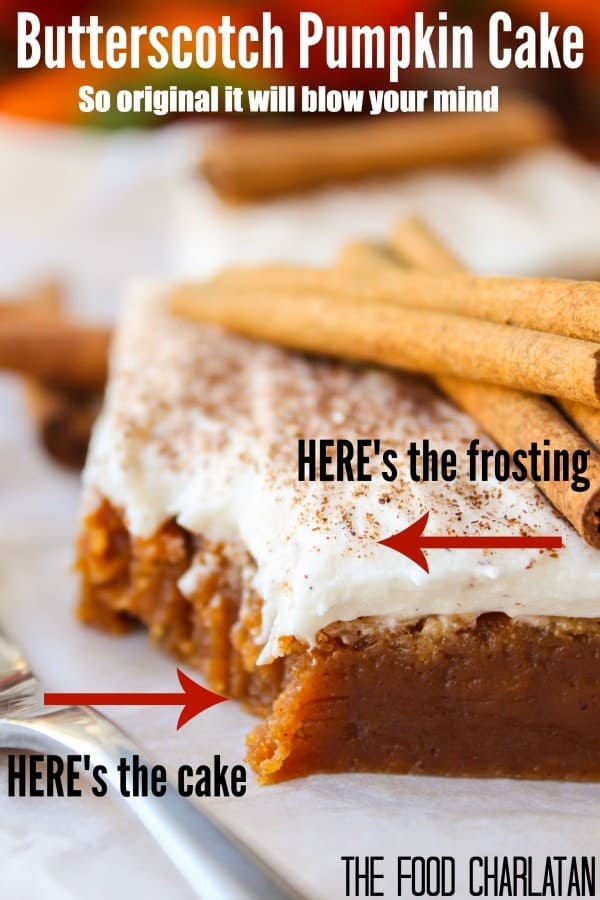 Clearly you can see why this cake is awesome now? Really guys, I wish you could taste this one. The day I made it, I happened to have a lot of people pass through the house. My cousin Lani tried it and made me email her the recipe immediately because she couldn’t wait for it to be posted. Later, Eric and his wife Sandi came over. “What is this???” Pumpkin. “I hate pumpkin. This is amazing.”

It’s like cake, kinda, because it has frosting. But it’s like a brownie, because it’s thick and chewy. And then the base is melted butterscotch chips, so there’s this caramel-y crust on the edges. 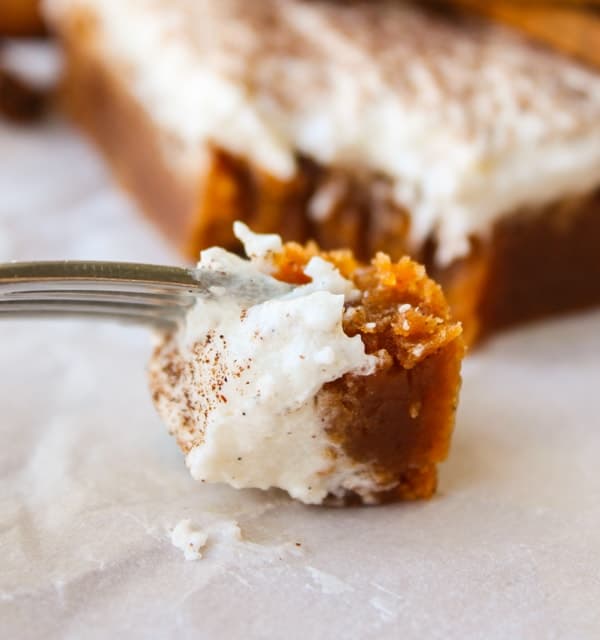 And did I mention that it’s super easy? You don’t even need a mixer for the cake part, only for the frosting. Oh, and speaking of the frosting. Well. See above photo with the arrows. It should explain everything. 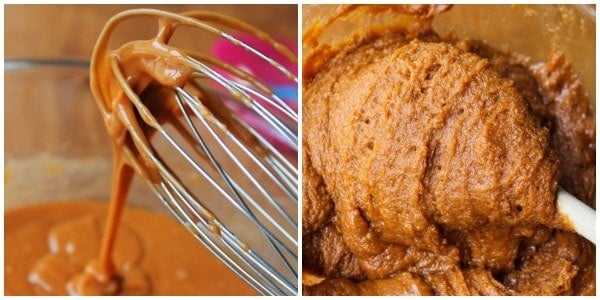 On the left is how your butterscotch and butter mixture should look after it’s combined. On the right is all the batter mixed together. Try to ignore my daughter’s pink bowl in the background :) Ooey gooey pumpkin cake!

Servings: 9 Servings
Prep Time: 10 mins
Cook Time: 27 mins
Total Time: 37 mins
This pumpkin cake starts out with melted butterscotch chips and just gets better from there. It is moist and chewy and almost brownie-like, except for the copious amounts of creamy vanilla frosting on top. This is pumpkin dessert at its finest, my friends.

This cake is really easy to double and bake in a 9x13 inch pan. Also, this is a generous amount of frosting; you may not need all of it. (I mean, I do, but that's me.) If you are doubling the cake, I would only make 1 1/2 the amount of frosting: 3/4 cup (1 and 1/2 sticks) salted butter, 2 1/2 cups + 2 tablespoons powdered sugar, 1 and 1/2 teaspoons vanilla bean paste (or regular vanilla), about 2-3 tablespoons milk, and a pinch of salt, if you want. Source: The Food Charlatan. Melted chip idea from these Lemon Lemonies by Averie Cooks. 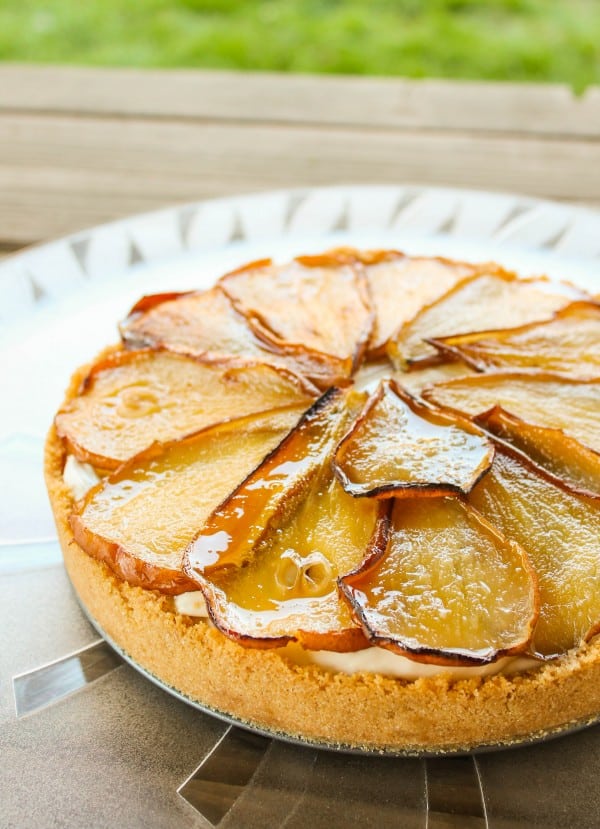 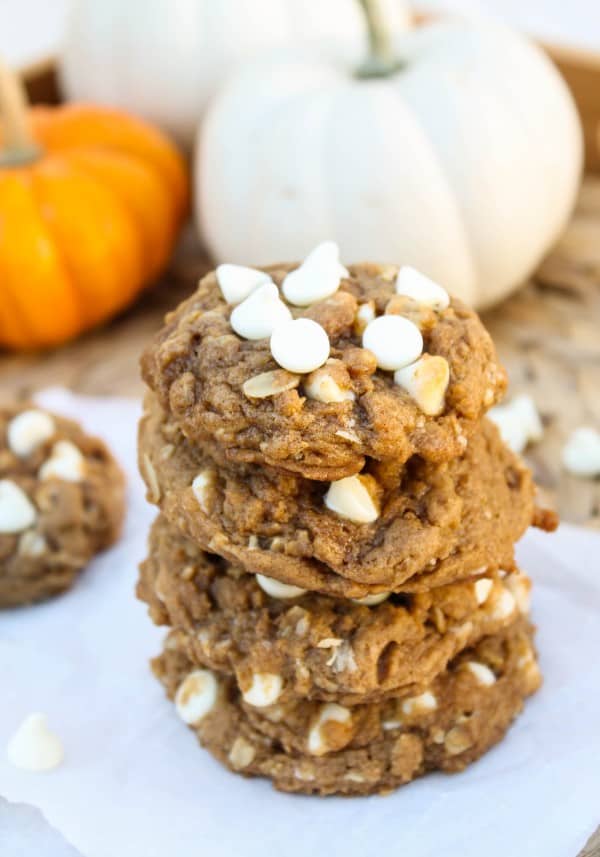 Pumpkin Cinnamon Rolls with Caramel Frosting: (from back in the day!) 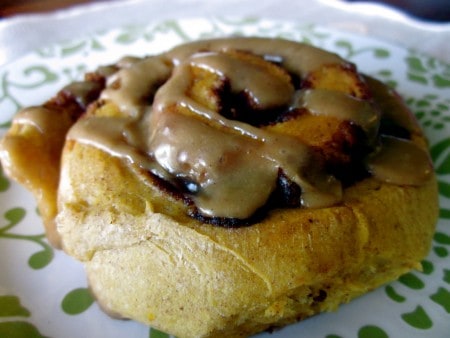 Other pumpkin recipes from around the blogosphere:

posted September 9, 2018 by The Food Charlatan