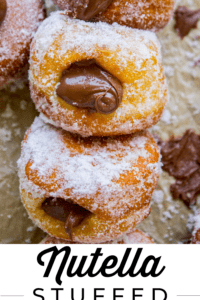 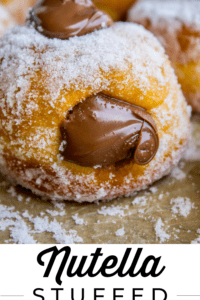 This Nutella filled donut recipe will seriously blow your mind. Imagine the softest, puffiest yeast donut of your life, then roll it in a ton of sugar. THEN poke a hole in the side and fill it with warm gooey Nutella!! These are insane you guys!! And not as hard as you think. Originally posted June 14, 2018.

Eric and I went on vacation to Australia in May, so we declared this month to be No-Spend-June. We figured we would try to balance out Spend-a-Lot-May.

But then Kirby came to the door. That’s right, the famous vacuum cleaner (sorry, I mean ‘Home Cleaning System.’ He corrected me like 5 times.) Our salesman’s name was Zack, but I call him Kirby because he’s a true believer! Kind of like how George Foreman named all of his kids George Foreman.

Kirby is trying to get on my good side by showing me JUST HOW MUCH dirt is in my house. Listen, I’m not perfect but my house isn’t a complete disaster. Or so I thought. Now I’m questioning EVERYTHING.

Kirby keeps asking me all these embarrassing questions that I didn’t even know I should be embarrassed about. ”How often to you clean these drapes? Do you just throw them in the wash?” Um, no, neither of those things. ‘How long have you had them?’ I mumbled something unintelligible but they’ve got to be at least 5 years old. Who washes drapes, people?? Come on am I the only heathen out there?

Then he started vacuuming my laminate wood floors. Did you KNOW that when you sweep, you’re basically pushing around little pieces of glass (dirt=glass apparently) and that it is basically SCRATCHING YOUR FLOOR???

Don’t even get me started on the mattress. He started vacuuming my mattress, guys. “How often do you vacuum your mattress?” Um well… “How often WOULD you clean your mattress if you had a KIRBY Home Cleaning System??” EVERY DAY PROBABLY.

When all is said and done, I walked away with one half mattress vacuumed, one hallway shampooed, one window track so clean I could serve dinner on it, and one arm of my ceiling fan spotless. And 24 easy payments of $108 a month. Gah! Just kidding! I said no way! Guys, who makes payments on a vacuum??? Sorry, home cleaning system.

Eric came home toward the end of the kid’s demo. “Look at how much dirt I’m pulling up! Other vacuums only clean the dirt you can see.” said Kirby. Eric wasn’t convinced. “People used to live in dirt. If I can’t see the dirt, why do I care about it?” We are officially the customers from hell. Poor Kirby!

But cleaning that ceiling fan has been on my to-do list for at least 6 months (I know because it was on my to-clean list before my Christmas party in December, but I decided (quite rationally, I might add) that no one even looks up at parties so who cares about the ceiling fan. So at least that job is 1/5 of the way done.

Okay okay enough about Kirby, LET’S TALK DONUTS! This donut recipe is the best, you guys. It’s makes the softest, puffiest donuts ever, that are so moist because we basically let them rise in a homemade sauna. You put a pan of boiling water underneath the rising donuts in a turned-off oven, and it makes them rise beautifully.

Have you ever made a donut recipe at home? From-scratch donuts can be a little intimidating, but it’s so fun and definitely a project you should try at least once. Have a donut party and invite all your friends so if you start a grease fire they can help you put it out. Just kidding! That’s totally not going to happen!

I feel like pretty much the best way to take a homemade donut recipe up a notch is by filling the whole thing with copious amounts of Nutella. Who’s with me?? Let’s go!

How to Make Nutella Donuts

There’s a lot here, so let’s start with a basic overview. It’s really pretty simple. Full recipe is at the bottom of the post!

First off, 3 tablespoons of yeast is not a typo. It’s a lot! That’s what makes this donut recipe so puffy! The picture on the left shows how foamy it should be after 5-10 minutes of proofing. If it doesn’t look super foamy, toss it and start over! On the right is how your dough should look after 2 minutes of kneading. It is a nice soft dough that will clean the bowl and will not stick to your fingers much.

Make sure your dough has doubled in size. It will be so soft and moist after rising in the homemade sauna in the oven! See oven photo below.

You want to roll out your dough to about half the thickness of your thumb. Use a 2 and 1/2 inch biscuit cutter and push straight down.

Leave plenty of space for your donuts to rise. My oil bottle says “donuts” on it because this was the second time I used this oil for frying. See the last step of the recipe to see how to take care of the leftover frying oil. (Save it for the next time you make donuts, of course!)

Here’s what your final rise should look like. You want LOTS of steam from that boiling water! Don’t cover the donuts this time.

When the donuts are finishing their rise, get your donut station all set up. I like to use a paper grocery bag to place the freshly fried donuts on. They are really absorbent. Paper towels work fine too.

Time to fry! If your donuts are super puffy when you flip them over, sometimes it’s helpful to push them down a little bit with a spatula so that the center gets fried and not just the edges.

Don’t be stingy on the sugar!! Pour it on!

How do you fill donuts with Nutella filling?

Once the donuts have cooled a bit, poke a hole in the side with a toothpick and work it around so the Nutella has somewhere to go.

Fill a pastry bag with Nutella. I like to place the pastry bag in a large glass to fill it, so much easier. Get the tip way inside the donut and fill it up!

What are stuffed donuts called?

As for the name of this donut, I think we have to stick with the full title, Nutella Stuffed Donuts. Sure, a jelly-stuffed donut is called a jelly donut but if you call this Nutella stuffed donut a Nutella donut, you might think there’s simply Nutella flavoring in the dough. Oh heck no. There is NUTELLA STUFFED INSIDE THE DONUT. Let’s never forget that.

Are you trying to say you don’t plan to eat every single donut you’ve just made immediately? I’m so confused.

These donuts have no frosting, so putting them single-layers into an airtight storage container is no problem. Be sure to seal it well. Store on the counter for the first few days. If you still have leftovers (jealous) put them in the fridge.

Donuts are best fresh. They just are. But if you’re looking for long-term storage, try freezing them before you stuff them. Allow to defrost overnight in the fridge and fill them the day you’d like to serve them.

And voila. Allll the Nutella. Invite your neighbors over so you don’t eat all these yourself! (But don’t invite Kirby. He will NEVER LEAVE!)

More donut recipes you will be sure to love! 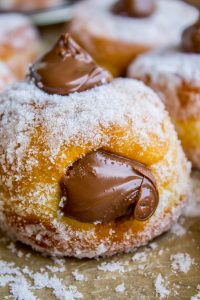 Servings: 25 donuts
Prep Time: 20 mins
Cook Time: 2 mins
Rise Time: 45 mins
Total Time: 1 hr 7 mins
This Nutella filled donut recipe will seriously blow your mind. Imagine the softest, puffiest yeast donut of your life, then roll it in a ton of sugar. THEN poke a hole in the side and fill it with warm gooey Nutella!! These are insane you guys!!

This recipe is adapted from these Maple Bars, which recipe I got years ago from Our Best Bites, who got the recipe from this Top Pot Doughnuts book, which I have just added to my Amazon wishlist. It looks so good!